Dimitrie appeared in a session focusing on open source projects in the AEC sector, featuring other well known open source developers, to talk about their projects and challenges that come with them. 👇

Just in case you missed it, our team-mate Izzy appeared on the YourDesk University youtube channel to do a live presentation demoing a Grasshopper to Unity workflow with Speckle. You can watch the video of the session on the link below. 👇

Hosted by Timon Hazel, Izzy joined up with David Morgan (Sasaki) and David de Koning (Arup) to do a quick introduction on what is Speckle, and give demo on Speckle's features and interoperability workflows.

After Izzy's introduction to Speckle, our background, and our mission (technical issues included 😉), both Davids showed off the results of the demo and a view on Rhino/GH → Unity interoperability, plus Arup's new tool, Carbon, which is built on top of Speckle.

Technology was playing against us that day, so some of the initial demo's had to fall back to pre-recorded material. But eventually by minute 22:00 they managed to get it working.

The demo shows a simple Grasshopper interoperability example that generates a pavilion using four points that were shared in a Speckle stream, allowing for near real-time data sharing between users. You can see this happening live around minute 25:00.

The resulting structure is then uploaded into the Speckle server, were the data can be used by other services and tools, like Carbon, that integrate into our system.

At about 30:00, the session goes into a Q&A dynamic where the team covered various topics, including:

If you've already watched it, let us know your thoughts about the session. If you haven't, go check it out now! 😄

With that, I'll leave you with a nice quote from the session:

"Come for the interoperability, stay for the fact that your teams are connected and you can now have services that run on it!" 👍🏻 David de Koning 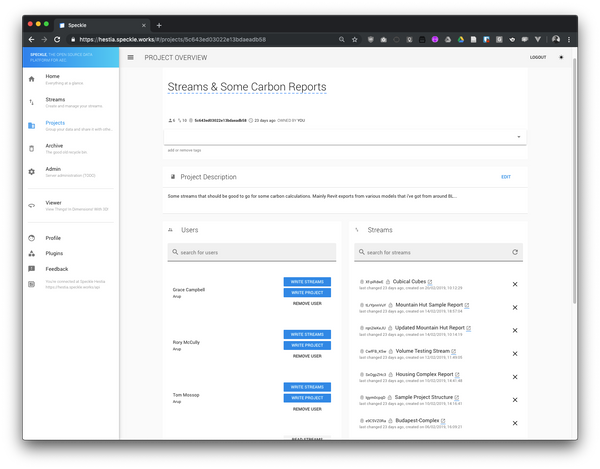